The EFX Racer by Durafly is sooo much fun to fly, it absolutely screams! It’s kind of like meeting up with your friends while driving a Ferrari. When you get the EFX in the air all eyes, and ears are on it. It looks beautiful and sounds awesome, especially while it is gliding.

Click here for product details, or to purchase the EFX Racer.

It broke our heart to give such a great airplane such a low rating so please read the explanation below.

The Set up we used for testing:
Battery: 1800mAh 4S 14.8V Li-Po Batter 65-130C Discharge (I really love this battery.
Propeller: 5.5 x 4.5 in
Expected flight time: 6-15 minutes. If you are pushing it to get the 100 mph speed you are going to be about 6 minutes of flying time. But with short bursts of power followed by long glides you can stretch the flight time out considerably. 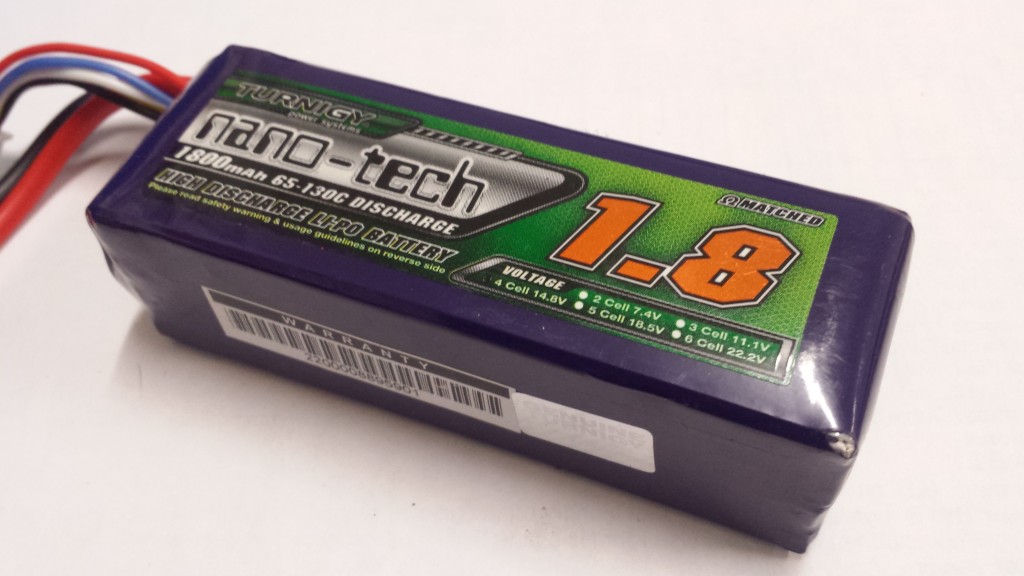 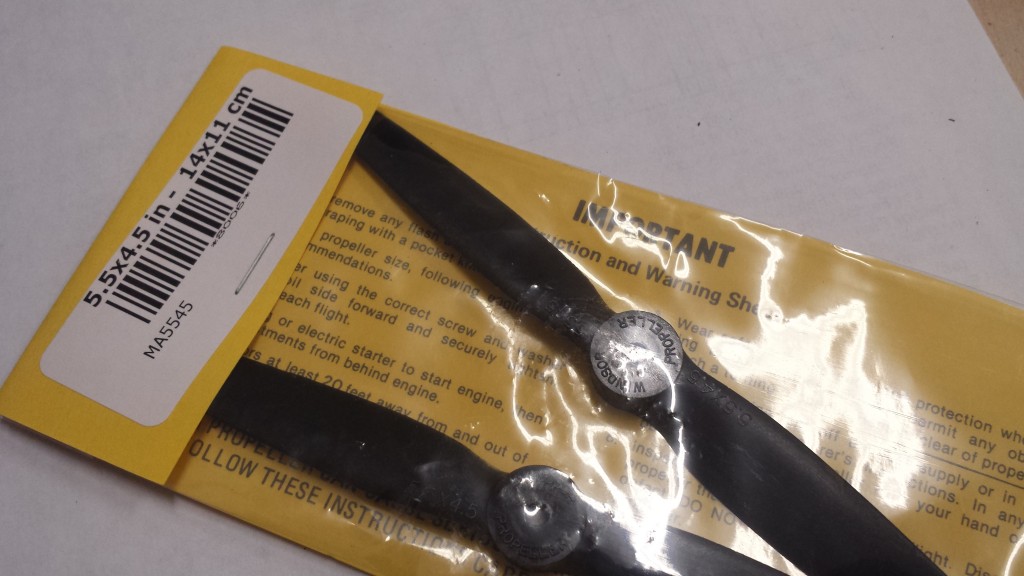 Flight Characteristics: The EFX Racer is very forgiving for a high performance aircraft. The flight envelope is very wide accommodating very high speeds without twisting, bending, or loosing control. But more importantly the EFX is also capable of slow flight. The large aspect ratio allows for a relatively low stall speed for a fast aircraft and generally the stall is predictable resulting in a lowering of the nose. These stall characteristics are in contrast to many of the other high performance, high speed aircraft, which often times have a swept wing, and consequently very little warning of an impending stall and stalls are violent, breaking unpredictably to one side or another. There does appear to be a tenancy to over-control in a down elevator, the problem is minor but for this reason I would give the EFX 4.5 out of 5 hearts.

Build Quality: The EFX  is put together very well and requires very little assembly. The fuselage and wing are made of high density foam with several stiffeners.  Even at high speeds while maneuvering aggressively the wings or elevator will not bend or twist.

There is however a weak link in the design of the EFX.   We flew approximately 10 flights for this review and broke 2 aluminum engine mounts. I have read others having problems with the screws coming out of the back of the motor/motor mount,  this is definitely a problem but not the problem that we experienced. Regardless of the type of failure of the engine mount, it appears that the problem is consistently the engine mount. 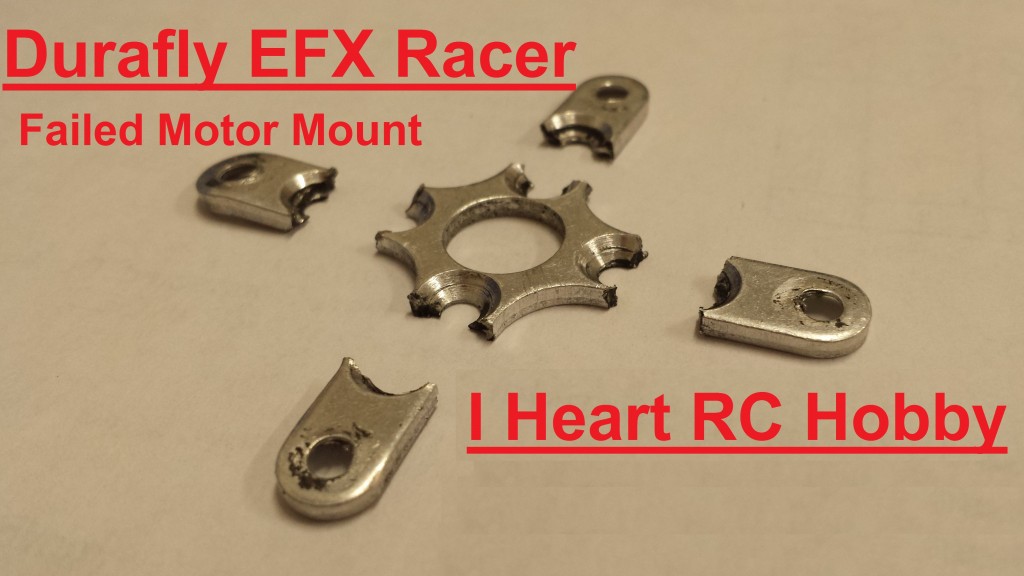 There is a Carbon Fiber replacement available from Hobbyking.  We have a few on the way and we will report on them once we have had a chance to test them out. If you want one, which I highly recommend, click here. 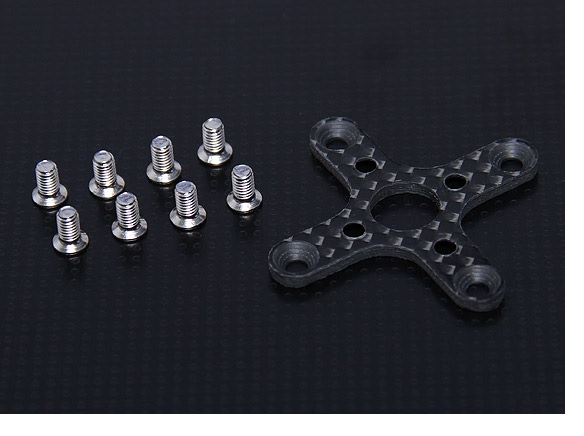 If you would like to see the in-flight motor mount failure watch the video below. Yikes!!!

The motor is a long can outrunner motor which also creates more of a weak point. If there is any kind of hit on the nose of the airplane it results in more torque on the motor bearing, which can damage the motor.

As a side note. If you need a replacement motor, be sure to order the “short shaft” version. 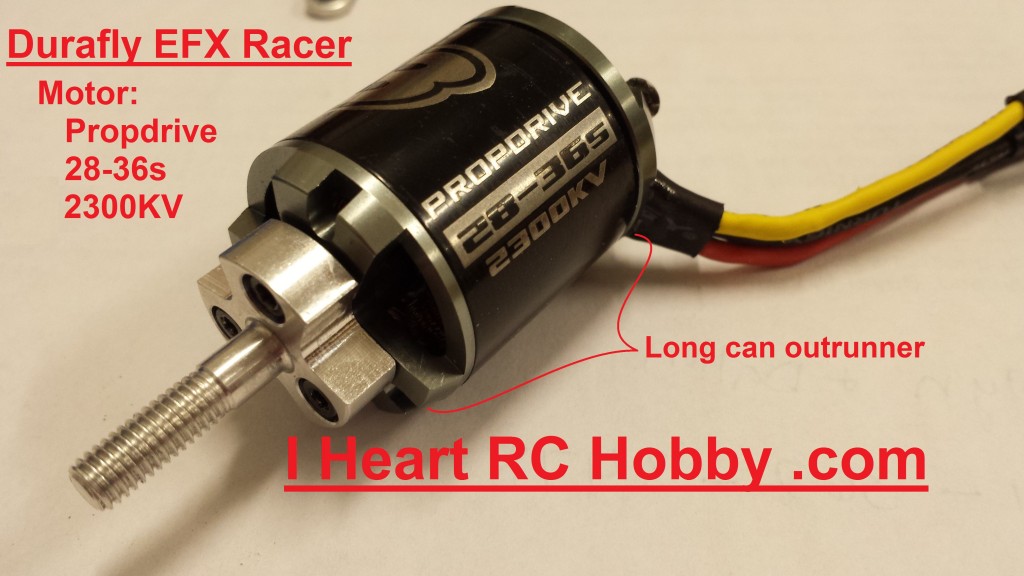 Because of the high probability of breaking a motor mount on each flight we had to give the EFX Racer 3 out of 5 hearts. It’s just not that reliable with the stock motor mount.

Finally, there is no landing gear on the EFX which invariably results in more broken propellers, etc. We get that a fast airplane is slowed down by landing gear but the incidental damage that results from not having landing gear made  it worth the trade off in our opinion. 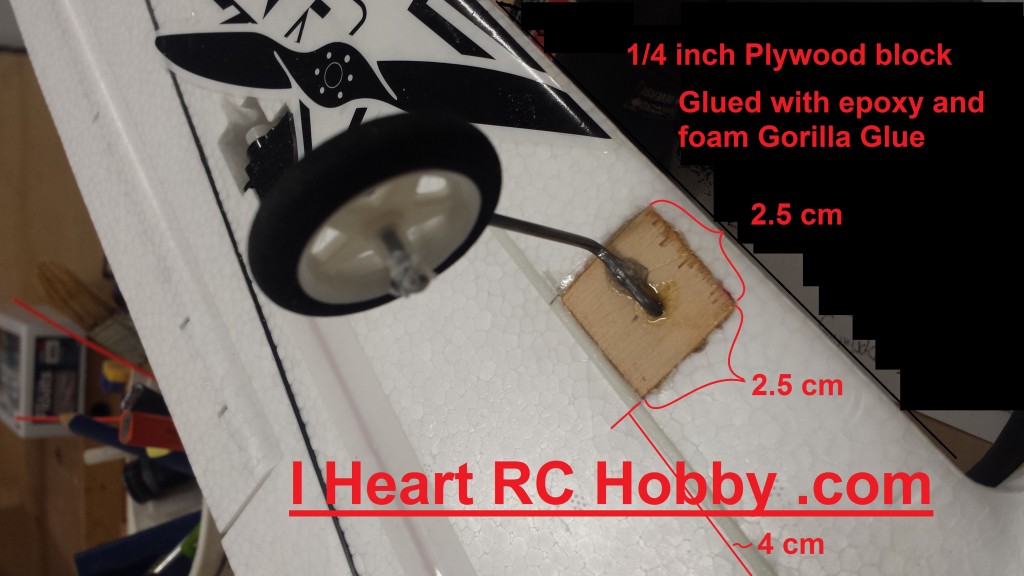 The wire used for the landing gear strut is 3/32 (2.38 mm) music wire (steel). I used 1.5 inch tires I purchased from my local Hobby Town (local hobby store). The tires pictured turned out to be a little weak for the EFX Racer, I was pulling the foam tire off the rim. I have since replaced the tire with a rubber tire. 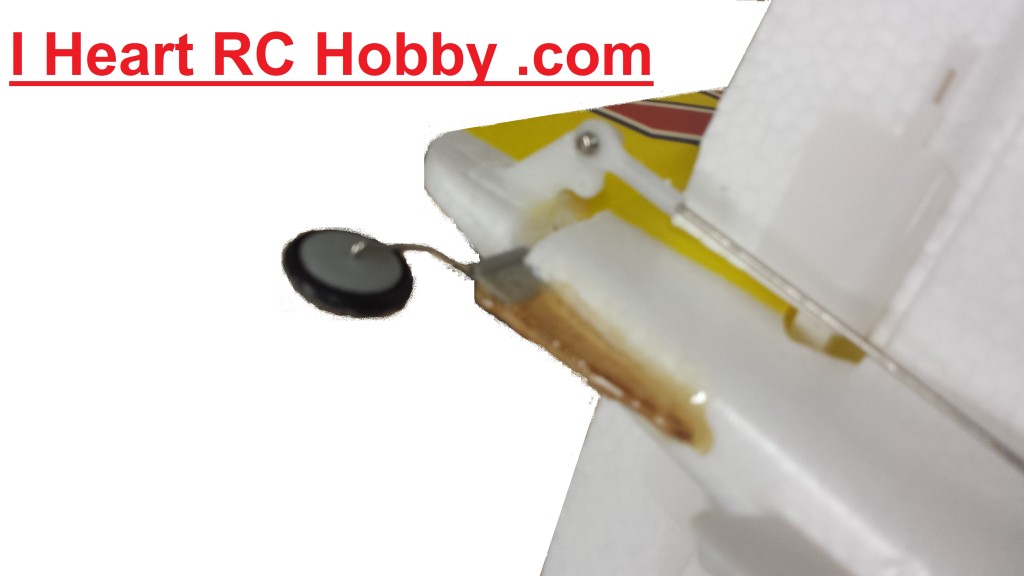 Here is the tail wheel. I just used a replacement tail wheel I found at the local hobby shop. It was not my preferred type of tail wheel, I had to epoxy a sliver of 1/4 in. plywood to the bottom of the tail as a support for the tail wheel mount. 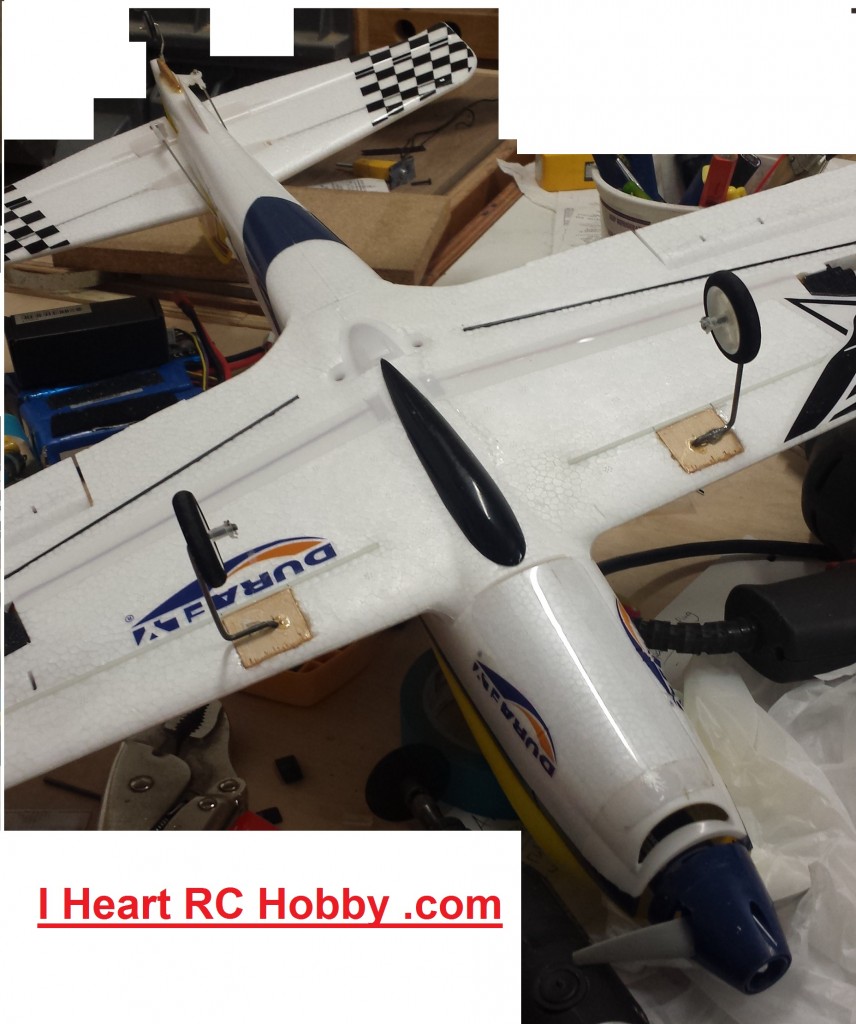 This is the final product. A little white paint would give it more of a real stock look. 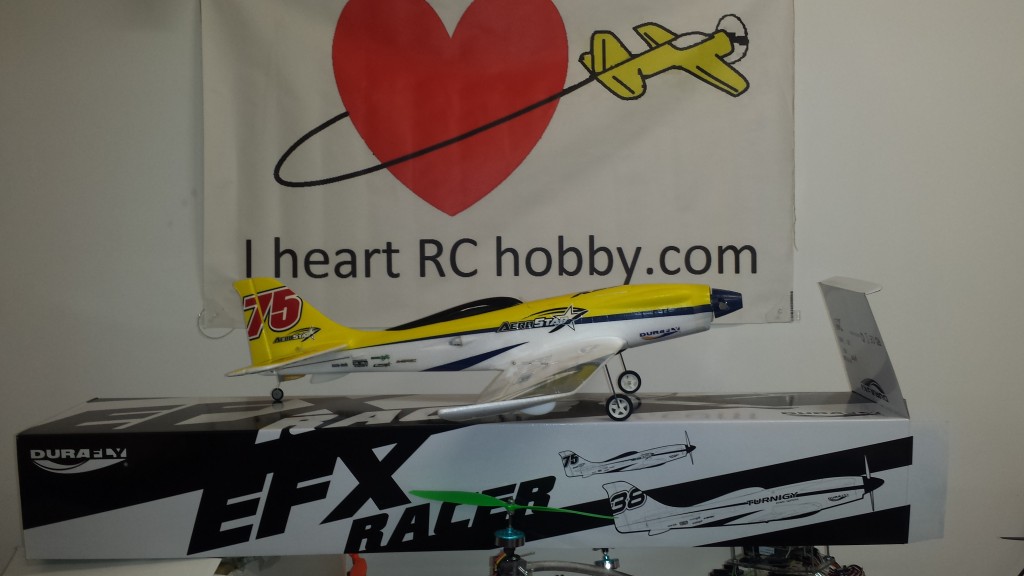 When we are determining whether or not an aircraft is a good value we ask ourselves, is there anything else we would want to buy with the money?

When considering the EFX Racer, it was hard to evaluate the value. Because there isn’t anything else we would want to buy with the money because this plane is so much fun! But, there is a fatal flaw, the engine mount is simply not strong enough for the 4S (4 cell) setup.  And when the engine mount gives way there is incidental damage i.e. broken propellers, broken engine cowlings, and likely a lost motor and a hard landing. All of the resulting damage makes the EFX Racer a high cost per flight aircraft and lowers it’s overall value. For this reason we could not give the EFX more than 3.5 out of 5 hearts. However if the new engine mount holds up, like we expect, then it would deserve a near perfect rating (4.5 hearts).

If you can't love a girlfriend, love something fun…I heart RC Planes!